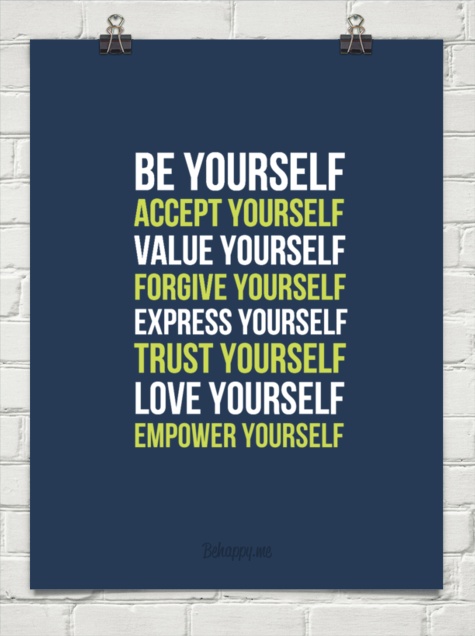 The biggest lie that a man learning to approach and attract women hears is that he should “be himself.” But I have a question for you. If you are overweight, broke, socially awkward and dress like Big Bird, should you still be yourself? I don’t think so!

I think that people get it wrong when they tell someone to be themselves. Because at the end of the day, who you are is not a fixed measure.

For example, think about yourself before college and after college. The chances are that you’ll see yourself as more mature and worldly. So who you are today, is a direct result of the choices you made and the actions you took in your past.

Which means that at any given point in time, you can change the person that you are going to be.

Be your best self

The one thing that I tell my students as far as self-improvement goes is to always focus on being their best self. And this is where your ability to be honest with yourself is important. At the end of the day, the biggest and worse lies that we tell are often the lies that we tell ourselves.

So before you can even think about becoming the best version of yourself, you need to identify the areas in which you aren’t being the best you can possibly be. Once you do this, you can start figuring out how to better yourself in these areas.

Here’s the thing, to a woman, the potential for success is as attractive as actual success. You might not drive a Ferrari and you might not own a condo, but if a woman knows that you are far beyond driven in whatever field you work in, she’ll recognise that and find that incredible attractive.

So find things that you are passionate about and become good at them. And listen, it doesn’t matter if you want to become a movie star or a super star investment advisor, what’s important that you own it and become the best at it. A quality woman is more likely to fall for the banker who’s great at what he does than a rock star who can’t get 20 people to come see his show.

We humans are more social than we’ve ever been in history. So the social circles that we are a part of are more important than they’ve ever been before. And I don’t mean just in terms of women and seduction, even when it comes to business and success, the people you have around you can have a huge impact on who you are and how you function.

So take a look at your current social circle and think about if you’re surrounded by people who you want to be like. If the answer is no, go out and make friends with men who are already successful at what you want to do. When a woman enters into a romantic relationship with you, this often means that she’ll be interacting with your immediate social circle. So make it one that she’ll want to be a part of.

I truly believe that at the end of the day, your social skills are far more attractive to a woman than your success, wealth or fame. Think about it. Cyndi Lauper was right. Girls do just want to have fun. Women want a man who can comfortably and easily handle any social situation.

A woman wants to be with the guy that everyone wants to talk to. She wants to be with the guy who’ll take her from one exciting social setting to the other and help her discover new people and adventures. So if you’re shy, awkward and socially inept, work on it. Go out and meet new people. In fact, forget about meeting women for a while. Focus on being able to meet and have fun with absolute strangers. And while you’re doing this, you’ll actually find that women are inexplicably draw towards you.

I’m not going to lie; looking like Brad Pitt isn’t ever going to hurt your chances in the dating game. But not all of us looks like Brad Pitt. But here’s the thing, there’s a difference between how you look and how you present yourself. So even if you don’t have movie-star-like good looks, it doesn’t mean that you can’t dress the part.

Study some of your favourite actors and musicians, and read through a few men’s style magazines and figure out a style that works for you. Or even better, find a female friend who’s willing to help you develop your own unique avatar. At the end of the day, you could be just an accountant, but that doesn’t mean that you can’t look like a rock star.

Nothing is more unattractive to a woman than laziness, and nothing screams laziness as loudly as bad grooming. Now I’m not saying that you need to shape your eyebrows and wax your chest hair every week, but take care of your simple grooming tasks. It will convey that you are a man who takes his body and his image seriously, and this is attractive to a woman.

Let’s face it; none of the great seducers of this world are born that way. Some might have childhoods that open up their minds to the workings of the opposite sex better, but in general, every great seducer is the product of countless hours of working at improving themselves. So I hope that this article will help you become the best version of yourself and the best seducer that you could possibly be.

One thought on “The Path To Self-Improvement. Being the Best Version of Yourself”